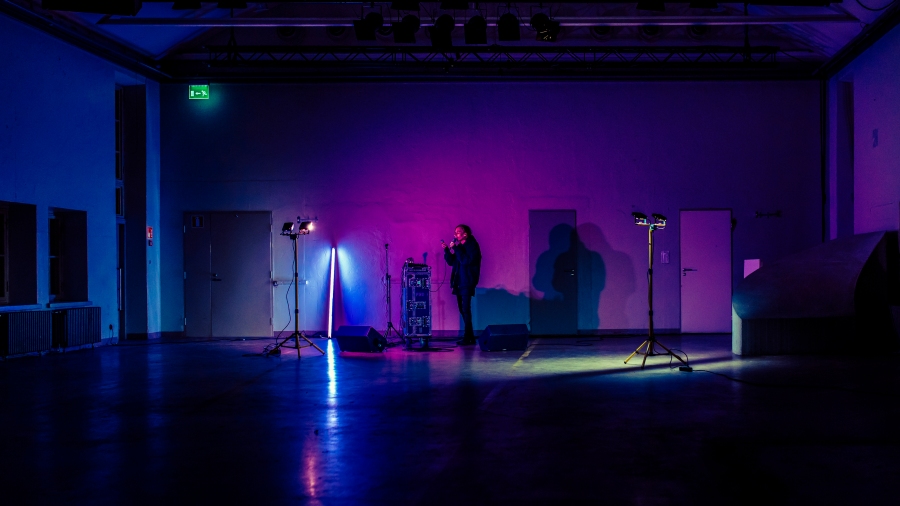 Mad House did it again. The house of performance arts has had its fifth season in Helsinki this winter. Unfortunately this time I wasn’t able to secure my season ticket due to uncertainty of my future work prospects. Thus I had to save money and buy only few tickets to carefully selected performances. Naturally Oblivia’s Nature Theatre of Oblivia was one of those and Niko Hallikainen’s solo performance Blue Exhaust was another.

In the week when I was once again feeling disillusioned with human relationships (let’s not talk why, this is not a blog of confessions) and had spent sleepless nights and most of the days inside my head ruminating my life and the perception of being an outcast and not ever finding anything moving, Mad House did it again. Along came Blue Exhaust vaporing my exhaustion away and filling me with hope. No, that’s hardly the feeling. With belief. With belief that there is always art. There is beautiness and decadent nobility in the decaying world. There is the power of performance. The shades of fluorescent light, the majesty of words and the visions they give, the deep resonance of human voice and the presence of the performer. That despite me feeling being born in the wrong age and being cluelessly out of the game there can be a text in which to relate and find solace. Yes, even sardonic satisfaction in the detailed account where Hallikainen intellectually dissects the real-estate agent trying to woo him on Tinder.

Blue Exhaust is a manifesto of loneliness and isolation. In its text we find ourselves lost between skyscrapers, in 1980’s Hudson River Piers, in image of dark land through airplane window and fantasizing about a man riding a black horse in the desert. We go through phenomena of contemporary life and technology-induced ways of trying to connect to each other. A metaphor of one’s suicide as closing one web browser and opening another shows us how language can find powerful analogies from the space in which it exists. Pornography inspired sex orgies told give images even more vivid as the performer himself is depressingly minimal in his actions. Hallikainen merely reads his text from iPhone screen and walks around in tiny circles holding his mike and periodically waving its cord. Yet the subtle and masterfully considered performing with perfectly timed throbbing 1980’s industrial music give deep voiced words the ground they deserve to descent from. It creates a captivating omnipresence through which we the spectators turn into with-thinkers imprisoned in the narrator’s lonely and isolated mind.

Anyone depressed, lonely and deeply sucked into gay ethos should let Niko Hallikainen mesmerize one into his feverish melting pot of Ginsberg, New York, private and explicit thoughts and humanly inadequate self-doubting abyss. Let him lead you in to the mythical Hudson River Piers and leave you there feeling complete. Complete at least until the night fades and gives way to the sleepless life where we slide past the endless bus stops and the chances to connect.

P.S. This post is in English because one point of this blog is to give me a playground to experiment different styles and ways of writing. Of course the main purpose is to promote invigorating, inspiring and exciting art.

P.P.S.  My work situation turned out happily after all and I’m fully employed whole of 2018. Now I try to find time to update this blog again. It’s a disgrace that I have neglected writing and spent time only tweeting. I have to finish two texts that have been left lying around for some time now. I’ll start with those.